It is time for a new project! For some time, I have been playing with the idea to automate my array of Linux servers and Raspberry Pi boards. In this article, I provide the motivation, explain my infrastructure and formulate the requirements. See this post as my project kick-off!

What is Infrastructure Automation?

At my work, we manage a private cloud with Kubernetes, external VMs with Docker containers, and internal VMs with docker containers or hosted apps. We do not want our day-to-day tasks to be executing shell commands on individual machines. Instead, we want to reuse and automate common tasks like installing/updating software packages, starting and restarting services, or other system administration tasks.

My goal is to have the same level of automation at my home. I want to use tools that help me with system administration, application configuration and application management on my infrastructure.

My infrastructure consists of:

I assembled the Raspberry Pi in a neat stack: 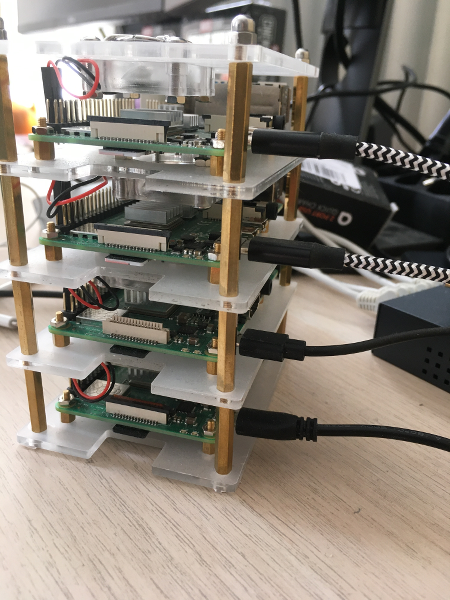 The Linux server runs with Manjaro, an Arch Linux derivate. The system is installed with the graphical tool, so I have a named user, a dedicated hostname and SSH.

For the raspberry Pi, SDD cards are flashed with a fresh copy of Raspbian Buster. I boot each system to enable SSH and to set a custom hostname for each machine (raspi-0, raspi-3-1, raspi-3-2, raspi-4-1, raspi-4-2). All systems are connected to the same switch.

Now we can start to automate the infrastructure!

Before I start something new, I like to think about the requirements. This helps me to better understand and scope what I want to do. Also, having a small checklist, where I can see how much of the project is achieved, motivates me.

First, let’s define infrastructure: a cluster of individual servers on which applications are running. Second, lets group all tasks into different groups:

Now, we can start with the project!

With this article, I started a new article series about automating computer infrastructure at home. My motivation is to use tools that help me with system administration, application configuration and application management to be as efficient as possible. The requirements for this project are grouped, and now we can start exploring which tools are best for the different tasks.

Previous: React: How to Design Smooth Page Transitions and Animations

Next: Infrastructure@Home: Configuration Management with Ansible